Sleeping in the gazebo at Cassoday city park seemed just fine. Sure, the mosquitoes and flies were out, and yes, there were countless gigantic spiders in the outhouse (my “outhouse” in the middle of the night was a tree instead), but the temperature was lovely and the stars were gorgeous. Then came the trains. Oh, the trains. We were 100ft from the tracks. Trains came every 15 minutes throughout the night. I am not exaggerating. I lived next to train tracks in college and have dealt with the rumbling noise overnight. But I swear these effing Cassody trains had the world’s loudest and longest whistles. There are 128 residents of Cassoday, yet the conductors seem to expect all of them to be milling around the tracks at all hours waiting to get hit. Jeez. So, we got zero sleep. Literally.
At breakfast we spoke to a man who’s mother owns a house by the tracks and he says the loudness of the whistles has forever been a problem for his family. Poor guy!
We saw some cool things today. Rode by an airfield and saw 4 tiny planes doing loop-de-loops, rolls and flying in formation.
We saw a calf being born.
We also made it to 1650 miles, the point Jacob had designated as “halfway”. We are passed the point of no return (cue phantom of the opera). Although Melinda told me “you know, when you get to Missouri, you should probably just keep going. Not worth turning back after that”.
A local cyclist on a spiffy neon yellow Bianchi road bike talked with us for about a mile as we rode. His bike looked so speedy and light. Jealous! He told us he always thought about doing a cross country trip but never has made the time. Jacob and I are so lucky.
We made it to Nickerson around 5:30p. The main street is bricks (bumpy) and the side streets are dirt/gravel/sand (my enemy). We walked our bikes on a side street about a quarter mile to our city park camp site. The city park had bathrooms but no showers. Then what did we discover? A SPLASH PARK. OMG what a fun shower!!! We put on swim suits, lathered up, bathed, and “did laundry” like hobos. So much fun! 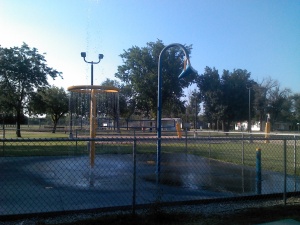 After showering we hit up the Pizza Connection that had a Jesus fish doormat and a “wrong” anti-Obama sticker on the window. We did not talk religion or politics to the proprietor. Before our food arrived Jacob serenaded me in a Kermit voice “why are there so many…songs about pizza?”. I looked at him like he was nuts, didn’t get it until he got to the “rainbow connection” lyric and instead sang “pizza connection”. Ok, ok, got it.
As we walked back on the dirt road, Jacob said “Nickerson county…we can either pave streets our build a ridiculous water park…whaaaat?”
Back at camp we met a toad. Jacob told me to kiss it so I could finally meet my prince. I told him “that would be too easy…and I’m not done with my adventure yet anyway!”.