We thought we might be able to say goodbye to Marco and Ronny in the morning but the kids slept in. Apparently they have done some illegal camping in other cities. They try to wake up super early and get out of there, but they have actually gotten ticketed a few times. This was a legal free site, so they took advantage of the extra shut eye. Marco actually goes running up to eight miles per day in addition to his daily bike miles. Hard core. This is a navy seal in the making.
Jacob and I ate oatmeal at camp and got going early.
There were not too many rest stops on our route but about 40 miles in we hit a nice restaurant. When we asked to use the rest rooms the lady said “follow the yellow bricks” (on the floor)…I skipped to the ladies room humming “follow the yellow brick road”. She said “good girl!”
I went outside to make a peanut butter and honey tortilla (yum) and happened to meet Adam, an attractive solo west bound cyclist from Toronto, Canada. Which is funny because we just went through Toronto KS about 5 miles ago. We chatted for a while and he asked if Jacob and I were married or a couple (that means he likes me, right? haha). We might see him again since he’s headed for San Diego and plans to arrive there around the same time Jacob and I plan to get to Morro Bay.
After Adam and I said goodbye (sniff sniff), a gentleman in the restaurant warned us “you got a few hills between here and Cassoday!”. I looked at him and said “No we don’t! I don’t believe you!”.
“Hill” is a relative term. There were some baby inclines, maybe “Kansas hills”, burt nothing scary. At all.
We stopped at another restaurant close to Eureka. The sign on the door said “closing at 6:15tonight for the middle school football game”. The nice owner of the store told us her grandson is the starting QB and this is his first game. She couldn’t miss it. When Jacob asked if she had any other grandkids, I heard her say “oh yeah! You know those 20 goats you passed on the corner? Those are my grandsons”… I looked at Jacob nervously for a second…this crazy lady thinks goats are her grandsons and she is probably sitting here watching us fatten up on candy like Hansel and Gretel before she will cook us and feed us to them! Now, what she really meant was “those goats are my grandson’s”. Possessive. He raises and shows them. She’s just a proud grandma. 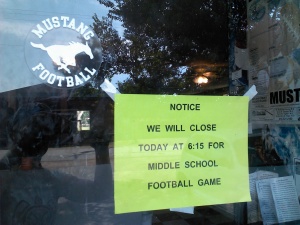 After our rest we passed Homer Creek, DOH!
The road in the afternoon was beautiful and deserted. We didn’t see a car for 20 miles. On this road we passed a wild horse sanctuary. The sun was just beginning to go down and there were about 50 horses together at the fence closest to the road. When they saw us coming, they took off galloping about a quarter mile in formation. It was gorgeous! 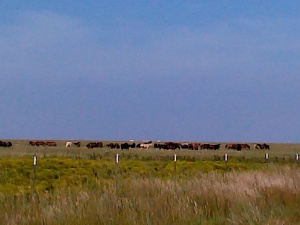 We made it to Cassoday and set up camp at the gazebo of the city park. There were spiders in the out houses. Tons of them.
We got some grub at the country store and heard about a few recent break ins. The manager told us “yeah he took tobacco, jerky and all the candy except for the twix”. Huh.
There was a box of free home grown tomatoes at the store. I ate 4.
As I was getting ready for bed I was secretly wishing that I was watching the first NFL game of the season. But I’m still having fun here!