We were tucked in our sleeping bags next to the splash park (Jacob in his hammock.and me in the tent) by 8:30p on day 22. However, the park officially closes at 10p. So, of course, from 9-10p, local hooligans (preteen kids) attacked the park and made enough noise to keep up awake for another hour or so. I hear Jacob mumbling curse words under his breath and then I hear a kid yell “We can be more quiet!” Followed by Jacob “We appreciate it!”. They eventually left, told us “Good luck sleeping!” and Jacob says goodbye by hollering “Good luck choosing a girlfriend!” (he could hear the dramatic conversations of the preteens…)
At 10:15p, we hear a train roll close by. After the no-sleep-train-fiasco of the previous night, both Jacob and I moan and scream in unison “Noooooooo!”. Luckily that was the only train that night and there were no whistles.
We woke up relatively refreshed and had breakfast at the Kwik Shop convenience store. Met a man who’s sister lives in Alexandria VA and he proclaimed “DC is filled with crazy people”
That morning we knew we would ride over 100 miles, including a tough first stretch of 60 miles without any services. We stocked up on water, gatorade and snacks and hit the road.
We took two breaks during the 60 mile trek. It was tough to find shade and once the sun came out out took about 20 min for the water in or water bottles to warm to the temperature of hot tea.
At about mile 45, we were crop dusted. Well, really the field right next to the road was crop dusted. I don’t think we actually got hit. It was so cool to see the extremely low flying plane cross back and forth over or heads. It looked and felt close enough to touch.

We did manage to make it the 60 miles and took a long lunch break in an air conditioned Subway restaurant.
We continued on and made it to Rush Center (13 miles from our destination) where we hoped to pick up food to cook for dinner. Nope. The stocked liquor store was open, but that’s about it. Jacob asked the liquor store owner if we could camp inside the store. It was nice and cool in there! Even though Jacob was serious with his question, the owner laughed it off.
Jacob downed a green “buzz ball” (strong tequila drink), we both had sodas (excuse me, “pop”), and left Rush.
Our camp for the evening was a rest stop in Alexander, KS. Pop 65. It was beautiful (gorgeous sunset) and the bathrooms were clean. I ate tuna on a tortilla from our food bag for dinner.
We fought a lot of wind and heat today. Another “century day” in the books. 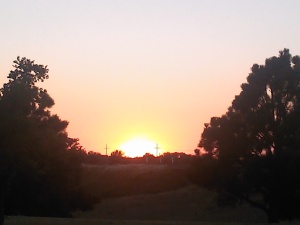