The question of the day today was: “should we stay for free at a church in Marion, KY….or camp 12 miles further (per the itinerary.and for $30) at Cave-in-rock?”
Choose the former!
The scenery from Hodgenville KY to Marion KY looked eerily similar to highway 11 in VA. Corn fields, rolling hills, small farm towns.
It was the land of hot-rod old cars though. My favorite was a bright green old mustang convertible. My aunt Joey had a green convertible named “green bean”…or string bean?… I loved riding in it and when I was little I would tell her to “Go, Jo, Go!”. The things I think about on the road….I digress…
Some farms had Perdue No Admittance signs. Those farms had particularly song aromas. I asked Jacob if that was the stench of slaughter. He said “no, that’s chicken poo”. Ok.

We ate lunch at a nice air conditioned cafe called Jeri’s.
As we climbed a pretty steep hill after lunch, we noticed a slow moving something at the top. I had no idea what it was. Ahhhh, it was a tandem recumbent bicycle. Cooool. That would never work for the R&J duo, or really R and anyone. I would go nuts!
It got really hot 12 miles outside of Marion. Good thing we were stopping early, because I was getting overheated. It felt like we were in a steam room (a really hot one like they have in Iceland!) AND we were blow-drying our hair. There was a significant head wind, of course, that was hot like a blow dryer!
We arrived at the Marion United Methodist Church and met pastor Wayne around 4:30. He was super welcoming and he told us there was a slight fee to stay there… Jacob assumed we were about to get baptized…haha… The fee was getting our pics taken and signing the guestbook. We read about other cyclists who have stayed at the church recently (including the cute one from a few days prior!!), some who we already met on the road and some who we may meet in the road soon. 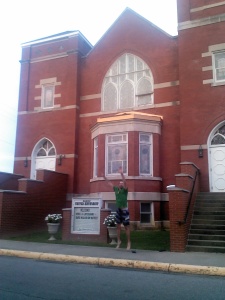 We stayed in the “kids hall” so the water fountain was miniature. Jacob made a short joke about me…meanwhile there were no less than three other ladies within ear shot who were all shorter than me. Oops!
We decided to hit the town for an Italian dinner. This restaurant had a picture of Guy Fieri on the wall, so it has to be good, right? Local organic produce. Yummy home-made everything. A great surprise for small town IL.
Back at the church I iced my knees and did lacrosse ball rolling for my upper back.
Today we saw the best street name yet: “Fishtrap Derbymine Rd”. We agreed that it sounds like a pair of rock bands who would open for the Stones so we both started speaking in british accents and pretended to be the announcers of the show.