Jacob woke up at 5a and went out. I got up shortly thereafter and started getting ready. He came back with a coke and I left to get coffee and fill up one million water bottles. Another reason I was upset the night before had to do with the fact that we were about to head into the part of the Mojave desert with very limited services. Like, almost nothing. I was nervous.
The gas station had “jet fuel-esque” coffee. Blacker than black, bolder than bold, and so delicious. I felt better immediately. I apologized to Jacob for acting bitchy the night before, he understood and apologized right back to me. Good. Into the desert we went.
There was a rest area about 25 miles in. Nice! A was walk-jogging, or “yogging”, around the area with a Raiders nerf football. He threw it to me and I deflected it like a cornerback. “Get that weak stuff outa here! You know my Skins are playing the Raiders next week?”
We were still on route 40, a major highway, in AZ when we got a flat. A cop stopped to make sure we were ok and to provide some protection from cars. He asked a few questions about our ride and was totally impressed.
After changing the tire we thanked the good cop and got rolling. We rolled right over the Colorado river into California. This was big. So far on our journey, whenever anyone asked us where we were headed, “California” had been our answer. Wow, we’re SO THERE! 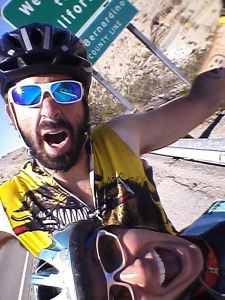 Pretty soon after crossing the river, a CA cop, Officer Fox, pulled us over. “You can’t ride bikes on the freeway, man!” Oops. There’s really no other to go to get where we want to be, and we explain our cross country craziness ride to him, so he gives us the green light. “You’re good until Barstow and new jurisdiction.” Roll on.
We went over Holy Moses Wash. I started saying, in my head, “Holy Moses it’s windy!” and “Holy Moses I’m hungry!”
We tried to stop at a gas station for a break about 45 miles in to the day, but we walked in and declared it to be the smelliest gas station in the country. We hit up McDonalds instead.
After the break we passed some cool scenery. Peach tufts and fault lines. Jacob told me all about them and quizzed me about faults and rocks.
It turned out that route 40 did have open rest areas and stores for us at least every 60 miles. At least so far. 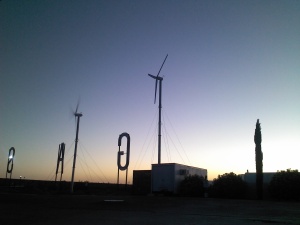 It approached nightfall and, lucky for us, we approached the High Sierra Oasis truck stop. We were allowed to camp for free in the parking lot and logged a 97 mile day.
We are now in “holy shit territory”. When people find out that we biked from DC, they now scream “holy shit!” and give us high fives and fist bumps. This happened a few times at the truck stop.
We met a guy who hiked the PCT for 4 months. He was on his way to Laguna to attend a friend’s funeral. The friend discovered he had cancer decided to use his remaining days to hike the PCT. We talked about what the best “road food” is (pb tortilla and honey), and about other adventures.
Jacob and I had cheeseburgers for dinner since the chef told us “I make da bomb cheeseburgers, once got a $20 tip, they are so good”. We went to sleep, in the truck-stop-proclaimed “middle of no where”, comfortable and with full bellies.