Kara, our generous host, drove us to town early and we got on the road. Three century-plus days of biking laid ahead of us until Flagstaff AZ where we will get a luxurious 3 day “vacation from the bicycles”. Yes we can!
We were both feeling refreshed from the Durango rest-spa day and we had a tailwind! A TAILWIND! What’s that?!? Crazy. We cruised up and over some significant hills out of Durango feeling like super heroes.
We passed Mesa Verde and we were slightly disappointed that our route didn’t take us up that summit…who are we? Climbing machines!
The terrain around Ute Mountain on the reservation reminded me of roadrunner cartoons. 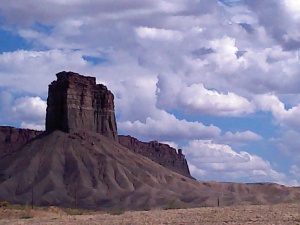 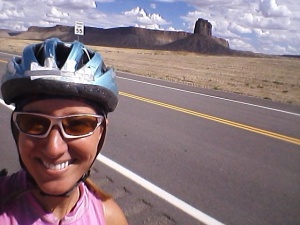 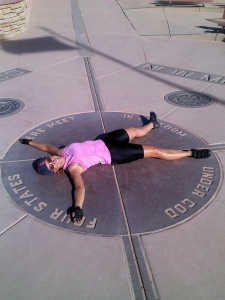 From the very start of our journey, Jacob has been telling people he is “from Flagstaff”. While it’s confusing since he was born in Arlington and lived there til he was 18, he definitely found “home” and maybe “grew up” (has he grown up yet? …debatable) in AZ. As Kyle would say, “I appreciate that”.
Jacob made it home.
Around 7:30 we hadn’t found the campsite Jacob had mapped out. Uh oh. We stopped at the Red Mesa trading post and asked around. “No campsites anywhere” was the response from motorists. I suggested we ask the convenience store manager if we could set up a tent out back. Jacob sent me inside to do the asking and said “Use your cuteness”. Well, I guess I was cute enough because they let us pitch the tent under the trees out back. Not a bad set up.
We ran into the guy who sold us the fry bread at 4 corners and talked with him for a bit before eating (I made Frito pie from convenience store supplies…culinary genius!) and hitting the sack. 106 miles today. Felt grrrreat! 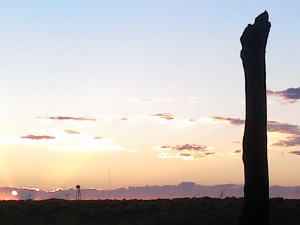