Ted and Colleen invited us to their campsite for breakfast at 0600. Yes, please! They made a gigantic pot of the most wonderful oatmeal with raisins and walnuts and served yummy strong coffee. Unfortunately, Jacob woke up with a belly ache so he couldn’t appreciate it fully.
Ted and Colleen are also cyclists. They literally lived on their bikes for two whole years and traveled all over the US. We heard some great stories. One was about a clean cut English cyclist they found on the side of the road in the rockies who had miscalculated the time it would take to get to a hotel…so he had spent the night in the woods with little water and no food…and no camping supplies…however “not a hair was out of place” and he was dressed in a “crisp white button-down and slacks”, crazy English! We shared some of our own stories too. They sent us off with a new package of granola bars and wished us luck.
Later that morning we passed the Lake of Egypt and saw signs to Cairo. Cairo, IL.
Jacob had major mechanical issues today. The skewer of his real wheel actually broke completely off. He couldn’t ride. So I rode 14 miles to Carbondale (an SIU campus is there) and found the closest bike shop. I was hoping I wouldn’t have to ride the 14 back to him with the new skewer. Thank goodness, when I arrived at the bike shop I got a call from Jacob. He found a ride in to town. Phhhhhew!
He was wearing his Brooklyn  American flag Jersey. One lady in a mini van stopped to ask him (as he was walking his bike, obviously something was wrong) if he was from Brooklyn. He said “no”, she said “well I am!”, and kept driving. A few minutes later a fellow cyclist stopped in her car with a bike rack and drove him to meet me at The Bike Surgeon.
We took a direct route to Chester, IL…home of Popeye. We went through Jacob County. 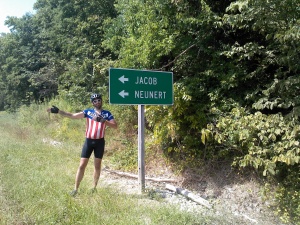 This was the hottest part of any day yet. The kind where you see water on the road on the horizon. We saw a building in the distance that Jacob took for a mirage. It was actually there and had a working soda machine! Sweet oasis.
In Chester we stayed in a bike shack next to and run by a Fraternal Order of Eagles club. Jacob called the shower a “prison shower”. When he was showing I iced my legs…heaven!
The small room where we slept had 9 bunks crammed together. Poor Jacob could not fit properly in them. No surprise, I fit just fine! 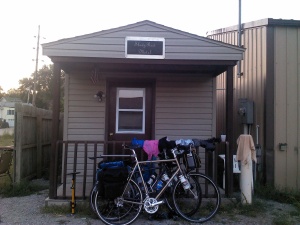 We ate dinner at the FOE club. Jacob played some slot machines and I watched USC football (go gamecocks!) and ate a ginormous brownie decadence sundae for dessert. Yum.
Jacob thinks there should be antifreeze/coolant for blood. Ours boiled a bit today. 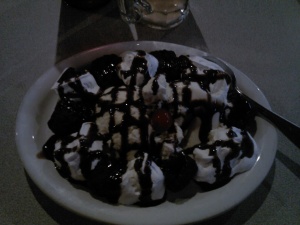