“Did you really eat all that grossness?”

Well yes and no. Nutrition was tough but we did our best.

I ate something every 2 hours. Jacob would go a bit longer.

Jacob and I cooked oatmeal and instant coffee for breakfast almost every morning. I put a scoop of protein powder in my oatmeal and sometimes added a cut-up apple when available.

In order to get Jacob moving and/or happy, “Just toss him a cupcake and a coke and he’s all set”… according to our friend Conor. Coke was crucial for Jacob’s wellbeing in the morning. RC cola and “Mexican Coke” were even better.

We chowed on roctane GU, bonk breaker bars, mixed nuts and jerky throughout the days while riding. I mostly drank plain ol’ water but we found White Cherry Powerade was magic and delicious. Cucumber-lime Gatorade was also interesting. If I needed a caffeine pick-me-up (you know, that 2:30 feeling), Starbucks iced double shots from convenience stores were my “crack”.

From day 1-6 I also used cocoa powder, powdered bcaas and greens powder. On Night 6 racoons or other critters managed to destroy my stash of power foods. I found a health food store in Berea KY during our first rest day and restocked the greens powder, but it wasn’t nearly as good as the powder from Mom’s Organic Market in Alexandria. (right, Katie?)

For “lunch” out of the food bag I ate peanut butter and honey on a tortilla plus a scoop of protein powder in water. The pb/honey/tortilla was craveable.

We generally stopped somewhere sheltered with A/C in the early afternoon. Usually Subway. I ate subway salads with chicken breast and as many veggies as they would put in there for me. More green peppers and spinach please! More! Vinegar and salt/pepper was my dressing. If we stopped at McDonalds I ate salad with chicken and sometimes yogurt with apples.

We cooked dinner most nights – our #1 staple was Zatarans rice and beans and green peppers, avocados and tomatoes. Sometimes we had bacon, eggs, meatballs or tuna. Sometimes we ate chili directly out of cans with a side of fritos – Hard Times frito pie genius!

Week three (mid September) began my “I’m hungry all of the time from morning to night” dance. This state lasted until approximately January 6 2014. 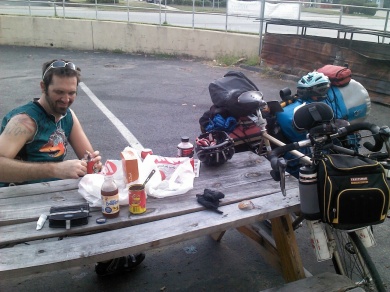