“The sea (sky) was angry that day, my friends. Like an old man sending back soup at a deli.”
-Costanza (Robin)
We woke up nice and early to a rainy Walsenburg, CO. We watched the news while eating breakfast. The big national news is torrential downpours and flooding in Colorado. Even though the worst flooding areas were well north of our path, I still got super nervous. The forecast called for more rain throughout the day.
The tubes Jacob had worked on the previous night had stayed inflated overnight…good sign. However, 2 miles in to our morning ride he gets a flat. It turned out to be a new puncture from a piece of glass. This is much better than if it was due to a patch not holding. Jacob nearly “loses it” but manages to pull himself together and we get back on the road.
We hit a massive headwind and start climbing up the foothills for about 22 miles. We see a sign “La Veta summit 8 miles”. The serious rockies climbing started at that sign. We enjoyed an awesome steady climb fighting the wind. I told Jacob “Great climb, man!”
At the summit it was 45°, brrrr, and rain began to just dump down on us. Then it turned to hail and freezing rain. We found that if we stopped pedaling (descending this mountain, mind you) our bikes would actually stop due to the massive headwind. No joke. There are very few times in my life where I’ve been as cold as I was on this descent. My bones hurt and we both were shaking. The worst part was not knowing when the next opportunity for shelter would come. We didn’t say a word to each other because there was nothing to do or say. It would be worse if we stopped. Our destination of Alamosa was at least 35 miles from the summit. That could be 3 or 4 hours.
We rode in this misery for about one hour when a kind soul in a truck stopped and offered is a ride. When he stopped ahead of us I sped ahead of Jacob and said “Yesss! Thank you thank you!”
Micky works at a Ford dealership and was on his way to trade vehicles…so we got a ride in a brand new 2013 F150. Micky blasted the heat for us but Jacob and I both still had problems getting warm. We told Micky how grateful we were (and continue to be) for the generosity of strangers. He is originally from Serbia, is a computer security guy by trade, and has lived throughout Europe (Switzerland was his favorite) and recently moved close to Denver.
He drove us about 25 miles into town and dropped us off in Alamosa at the Grizzly Inn at 1:50. After we waited at the front desk for a while (at least the lobby was warm), the strange-ish manager showed up and told us “we won’t have rooms ready until later”. “How much later?” we inquired, still shivering and soaked. “2p”. Ummm, I think we can wait 10 minutes… Jacob went next door and checked with the twice-as-expensive Best Western while I hung out in the lobby of the Grizzly Inn. He calls me with the too-expensive rate quote and said, in a crazy high pitched squeaky semi-paniced and fet up Jacob-voice, “So I say let’s do the Teddy Bear (he meant grizzly inn and I thought this was hilarious) and I see KFC!!!”. He came back with warm food and we ate in the lobby. The same strange-ish manager lady came back and asked “what can I do for you?” (like she didn’t recognize us from 8 minutes ago). She said “Oh you are gonna WAIT?” Jacob said “We have no where else to go!”.
She proceeded to check us in to our miraculously then-ready room. It was only after hot showers did either of us feel normal again.
Later on we walked towards Walmart to get new tubes and stumbled upon Kristy’s Sports Store which was similar to REI and had bike supplies. We purchased new tubes (woohoo!) and cold/wet weather gear since the forecast still called for cold and rain. After a six year drought, this was the rainiest week in CO history. Perfect timing. 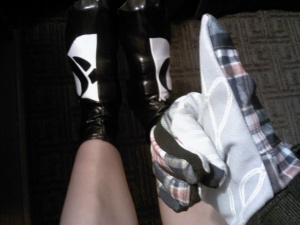 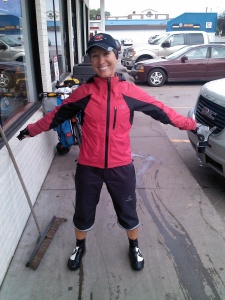 We did laundry at the motel and Jacob snuggled with his fresh-from-the-dryer warm clothes. We ate pizza at the local pizza shop with Adam’s College kids. It’s the college from Revenge of the Nerds!
We went to sleep dreaming about freezing rain, cold mountains and numb extremities… a big test was still ahead of us on day 30.