We had a pleasant night sleeping in the city park. Jacob made friends with two little gray kitties… then chased them away from our campsite since I’m allergic to cats.

In the morning we hit the rest rooms at the 21 diner and had breakfast there. They had a curse word jar (each word was $1), so we kept our conversation clean this morning.
Rolled out around 7a.
Instead of the usual VA/KY roadkill (skunk, raccoon, deer), we now began to run into dead armadillos. “Close your nose!”, Jacob screams. Much worse than skunk smell.
We made it 12 miles at a great pace when Jacob spied a place to rest. “Really? I don’t need a rest yet!” Good thing we stopped because he needed to change a spoke. He hadn’t noticed it since we are now riding with headphones. Will have to pay attention to that!
A lady at the grocery store told us her in-laws host cyclists and to be careful on these roads because “people in MO don’t understand cycling”. Duh, we found that out yesterday in labor day weekend traffic!
The rest of the day was spent climbing the Ozark Mountains.  They are not nearly as steep or long as the VA monsters, but it was one million degrees outside. We both thank our lucky stars we went though VA in a relatively chilly, overcast spell. Not sure I would have made it in the heat and humidity.

At the peak heat hour, 2p, we stopped at a rafting and convenience store in Alley Spring for A/C and cold beverages. We met Eric and his family (owners of the store) and chatted for a while. He is a super cute 27yo who is training for his first full marathon and a triathlon. Jacob suggested I take him with us…move him back to Arlington!
Eric told us we had one more tough hill to Somerville before the terrain leveled out. He was right. The last 37 miles was steady rolling, but mostly climbing. I took it really slow and tried to be as efficient as possible. I told Jacob that I wanted to spend the least amount of energy necessary to make it to our hotel. I have the computer on my bike so I know exactly how many miles we have left. Jacob does not. When he saw the “Houston 10 mile” sign I hear “What?!? Aaarrrgghhh I thought we were so much closer! Gaaah!”
We survived and rolled in to Houston MO at dusk. 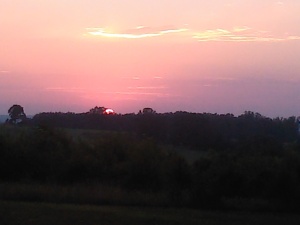 We showered (best shower yet!) and went to the Cozumel Restaurant across the street. They serve real margaritas and beer! Score one for MO!
Jacob was intoxicated after 2 margaritas and a muscle relaxer. We stopped at Walmart on the way back to restock our food bag, he sang in the aisles and told the check out lady “Rachel, that’s a lovely name, my mom always told me to find a nice girl named Rachel”. At the hotel we both crashed immediately. Rest day tomorrow!
Church sign today: “Choosy moms choose Jesus”.